Clogging is a truly American dance form that began in the Appalachian Mountains and now enjoys widespread popularity throughout the United States and around the world.

As the Appalachians were settled in the mid 1700's by the Irish, Scottish, English and Dutch-Germans, the folk dances of each area met and began to combine in an impromptu foot-tapping style, the beginning of clog dancing as we know it today. Accompanied by rousing fiddle and bluegrass music, clogging was a means of personal expression in a land of newfound freedoms.

Clogging is a dance that is done in time with the music - to the downbeat usually with the heel keeping rhythm.

As clogging made its way to the flatlands, other influences shaped it. From the Cherokee Indians, to African Blacks and Russian Gypsies, clogging has enveloped many different traditions to become truly a "melting pot" of step dances.

For the most part, clogging evolved as an individual form of expression, with a person using his feet as an instrument to make rhythmic and percussive sounds to accompany the music. At the turn of the century, many cloggers began to add this developing step dance to the square dances that had been enjoyed in their communities for decades. One of clog dancing's most renowned founders, Bascom Lamar Lunsford of Asheville, North Carolina, helped to popularise the art of team clogging by adding it as a category of competition in the annual Mountain Dance and Folk Festival held in Asheville during the late 1920's. A group called the Soco Gap Cloggers won the competition with a routine featuring precision mountain figures accompanied by freestyle step dancing. The Soco Gap Dancers became well known for their energetic style. In a performance for the Queen of England, it is reported that her majesty remarked at the footwork as very much like "Clogging" in her country. The term stuck, and the media used the term in documenting the performance.   The step dance emerging from the Southern Mountains became known as "clog dancing".

In the mid 1930's, another innovator emerged to help propel mountain style dancing to national prominence. Dr. Lloyd "Pappy" Shaw, a teacher and Superintendent at the Cheyenne Mountain School in Colorado, and an avid collector of dances, steps and square dance calls formed an exhibition team from the dozens of high school students he taught and began to tour the United States, sharing his knowledge of dance with all who were interested. His 1939 book, "Cowboy Dances", is considered by many to be one of the finest historical collections of early American dances ever printed. After World War II, Dr. Shaw began to offer classes at his Cheyenne Mountain School in the instruction of old time dancing.
As Americans became more mobile, and interstate highways offered the opportunity for dancers to travel from area to area, the popularity of square dancing as a national activity increased. During this period, the need for standardization in square dance calls became increasingly evident, and a number of callers began to work on standardized names for the movements and figures that had developed independently of each other in hollows and communities throughout the country.   As square dancing began to evolve as a structured activity, the emphasis focused on the execution of the figures, and the step dancing footwork that had accompanied earlier dances was replaced by a gliding step. Clogging once again was relegated to solo expression, with only certain areas of Appalachia and the Ozarks continuing to dance the old-time calls with clogging footwork.  During this period, Bill Nichols, of South Carolina, taught clogging and old-time squares at the Fontana Resort in the Western Carolina mountains and built a legacy of instruction that has branched out to include teachers from all parts of the United States.    He is considered by many to be the “Grandfather” of modern clogging.

During the late 1970's, a new means of clogging expression began to gain popularity -- the line dance. Propelled by the catchy beat of country and pop tunes, teachers such as Tandy Barrett and JoAnn Gibbs of Georgia, Gloria Driver of Texas, Lucy Johnson of California and others wrote sequences of steps to accompany phrases of a popular tune. These strings of steps were performed to a particular song, with step cues prompting the dancers through each section.   Also during this time, the Green Grass Cloggers were formed in North Carolina.  The group combined old time steps with high kicks to create a uniquely stylised clogging form that endures today.

Sheila Popwell, of Georgia, is credited as one of the creators of the first standardized cueing and terminology methods. These generally accepted forms of notation made it possible for cue sheets to be produced for dance routines, giving dancers the opportunity to learn new material without having to travel to workshops or conferences. 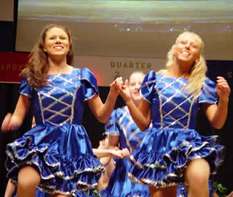 Clogging today is less impromptu and more complicated than the simple rhythmic dance begun by our ancestors. New influences are creeping into the dance because of popular culture. Tap dancing, Canadian Step Dancing, Irish Hard Shoe and even street dancing and hip-hop influences are being seen to bear on the style of steps and dances performed by cloggers today. Performing teams wearing brightly colored costumes, calico or sequins have sprung up everywhere, providing entertainment with impressive precision footwork. Clogging Competitions across the country bring together teams from East and West to vie for trophies, honours and cash prizes.

In the 1980's a dancer named Burton Edwards of Maggie Valley, North Carolina began winning competitions with his "buck" style of clogging where the weight is carried on the ball of the foot and a pitter-patter is produced with the heel clicking the floor and returning to the ball of the foot.   While the style had been around in the Appalachians for generations, Burton's smooth style made it the "must-learn" style and drag-slide competitions began recognizing dancers who did the heel-toe buck style with winning marks.     In the 1980's as well, Ottawa Valley step dancer Judy Waymouth of Ontario, Canada made an appearance at the Possum Trot Workshop at Fontana Village, North Carolina and did an exhibition of Canadian Step dancing.    The hop-double-hop style and double-doubles made jaws drop and teachers around the clogging workshop world embraced the fast paced style.   The styling shift was the most dramatic the modern clogging world had seen to date and it opened the door for more percussive influences such as "Riverdance", syncopated tap dance and other dance styles.   Amazing freestyle dancers who topped the competitions and workshops through the 1980's and 1990's also helped to infuse styling changes into the modern clog dance, including Brent Montgomery, Sherry Glass-Cox, Bobby Revis, and many more.   Clogging teams like the Clogging Express began to showcase tightly precisioned hand moves and jazz work to line dances.      Today, teams like the Dynamic Edition, The Southern Belles, The Clogging Sensation, Final Destination and many more infuse modern clogging percussive footwork with intensive jazz and formation work to make competitions a high-energy mix of incredible foot and body movements.    A new generation of solo dancers like Mark Clifford and Brandon Norris have continued to influence young dancers to push the envelope and continue to shape this melting pot of dances.     Many competitions today offer both traditional and modern clogging categories, and organizations like America's Clogging Hall of Fame and the National Clogging and Hoedown Council work to promote and preserve the important traditional aspects of clogging.

In 2003, clog dancing was included as a competitive dance sport in the AAU Junior Olympics.    Clogging group "ALL THAT" placed second in the nationally-televised talent contest "America's Got Talent," and cloggers are now being spotlighted on television and major motion picture projects.

As with any form of expression, I hope that clogging will continue to put us in touch with ourselves and our heritage, and render upcoming generations with the same joy it has provided us.   The Double Toe Times magazine is dedicated to preserving the heritage of this art form and also share its innovations as it continues to grow.